Like Nigeria, Cambodia warns EU not to ‘interfere’ in country’s affairs

Cambodian premier, Hun Sen, warned against interference in the country’s affairs Tuesday, his first comments since the European Union launched steps to cancel trade benefits that would hammer the local garment industry. 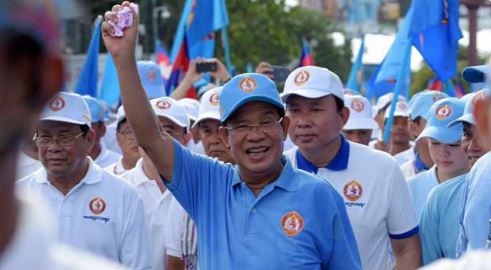 The bloc announced Monday it would begin a process of intensive monitoring to decide whether to suspend duty-free preferences under the “Everything But Arms” (EBA) deal.

The move would deal a crippling blow to Cambodia’s robust garment and footwear industry, which exports more than $4 billion worth of products to the bloc. It comes after repeated warnings from Brussels and in response to elections in Cambodia last year held without the opposition after the Supreme Court dissolved the party in the run-up to the vote. Cambodia is the EU’s sixth largest garment supplier and the industry currently employs more than 700,000 workers, according to the country’s factory association. Analysts say Hun Sen, who has ruled Cambodia for more than 34 years, is eager to retain the trade preferences, but does not want to be seen bending to international pressure. In recent months he has requested pardons for dozens of activists and opposition members arrested ahead of the July vote, but he has also lashed out at trade threats in defiant speeches. Cambodia “cannot exchange its independence and sovereignty for anything”, he wrote on his official Facebook page, which has more than 10 million followers. “We want to be good friends with other partner countries that want to see Cambodia progress without interference in the country’s internal affairs,” he added. He did not explicitly mention the EBA deal, but the country’s ministry of foreign affairs issued a statement the same day calling the decision from the bloc an “extreme injustice”. The EU is still at least a year away from making a decision on whether to scrap the preferences. Union leaders and businesses said the loss would have a disastrous impact on the industry. “The competitiveness of our sector will unduly be put at risk, the reputation of our industry will be harmed, and Cambodia’s development will be halted,” the Garment Manufacturers Association in Cambodia said in a statement in response. Tariffs on garments will rise by 12 percent and it will more than double for footwear exports from eight to 17 percent, the statement added.

The loss of EBA could cost Cambodia up to $700 million a year, said union leader Pav Sina. “We fear that investors might move to other countries that have EBA, so it will affect the jobs for Cambodians.” The US embassy in Phnom Penh said in a statement that it “shares the EU’s concerns” and called for the charges against Kem Sokha, the leader of the now dissolved Cambodia National Rescue Party, to be dropped. It also called on Cambodian leaders to restore a “true, multi-party democracy”. Hun Sen’s Cambodian People’s Party won all seats in parliament in the election, effectively turning the country into a one-party state.